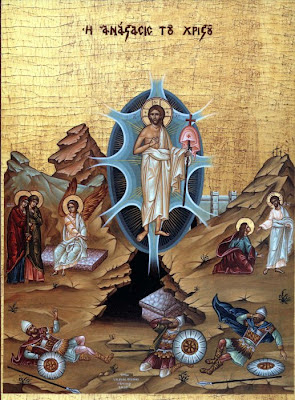 Christ is risen! Indeed He is risen!

The Psalms of David - Psalm 34

"Judge those who harm Me, O Lord" -- appropriate for this Holy Saturday, the Sabbath of Sabbaths.

[In the Upper Room] our Lord explicitly appealed to our psalm...to show that this hatred and this persecution by the world are a realization of prophecy: "But this happened that the word might be fulfilled which is written in their law, 'They hated Me without a cause'" (v. 7, also 68:4 and 108:4).

These, then, are psalms in which the praying voice is that of Christ Himself, and, by reason of her sharing in the sufferings of Christ, the Church prays these psalms in His Person.

The prayer of Christ here is a battle prayer, for He wages war on the forces of sin, darkness, and destruction: "Let ruin come upon them unawares." ... This is the prayer of Christ doing battle with the forces of sin and death, looking forward to the hour of His victory, when His very body, brought down to the grave, wil rise again in the paschal victory: "And my soul shall be joyful in the Lord; it shall rejoice in His salvation. All my bones shall say, 'Lord, who is like You, delivering the poor from him who is too strong for him.'"

Email ThisBlogThis!Share to TwitterShare to FacebookShare to Pinterest
Labels: Psalms of David

The Psalms of David - Psalm 33

"I will bless the LORD at all times; His praise shall continually be in my mouth."

"Oh, taste and see that the LORD is good; blessed is the man who hopeth in Him."

"Keep thy tongue from evil, and thy lips from speaking guile."

Movement of the heart is stilled and quieted through repeated meditation on the sacred name of Jesus. The Jesus Prayer -- "Lord Jesus Christ, Son of God, have mercy on me, the sinner" -- is treasured as a blessed, honored way to commune in intimate prayer with the One who fills temples with glory yet inhabits a womb in silence, who blazes fire forth from a tomb in Jerusalem every Pascha, yet who speaks with a still, small voice. When this Messiah is invoked and mercy begged for, not only are our lips sanctified, but our efforts are rewarded with a calming of inner impulses towards all surrounding earthly cares. When we are calmed and sufficiently prepared to hear from God (something today's McMegachurch takes not at all into account), then, in His timing, does He visit those who've tilled the ground of their hearts with the beautiful name of Jesus Christ. We do, indeed, taste and see that our Lord is a good Lover of mankind, for He is not merely content to rid us of the cancerous, diseased existence that is the evil and guile mentioned by David above; He must also fill us with His fear, faith, and love that comes only from an expected visit.

At times expected visits are longer in coming than anticipated...the grave, Hades, the silent silencer, evilly stifled all praise that would have come from it. Its yawning mouth wordlessly destroyed and guilefully consumed all who came to it...until a Word came whose words forced the tomb to reverse its flow, to turn back like Jordan and issue forth a man from it. Soon it would no longer be dictated to but would indeed speak forth a Logos -- though even this would be apart from its own accord. Since then the echo of that Word has left a bitter taste in Hades' mouth -- its evil tongue and guileful lips must always remember both Lazarus' being drawn out and the Word's being spoken from the mouth of the grave. That Word, that Name, is He Whom our lips and heart must ever embrace -- woe to us if our lips honor him apart from our hearts! -- so that our silencing by the grave will not be without a final Word.
Posted by Fr. David at Saturday, April 19, 2008 No comments:

Email ThisBlogThis!Share to TwitterShare to FacebookShare to Pinterest
Labels: Psalms of David

My sincere apologies for staying away for so long...though perhaps I should qualify that: lenten obligations (the kind that, in streamlining one's life, one finds one should feel more acutely both in periods penitential and festal) have been pressing lately. Just as I am taken aback on this day by the fact that we have but five days remaining in our lenten journey as Orthodox (Lazarus Saturday is the first post-lenten day), so I have been surprised at the fast-approaching end of the school year. Thus, these obligations that have taken priority over this blog are, in fact, ones for which I should not apologize. Nevertheless, it is good to sit and type after so long an absence.

Who is so great a God as our God?

Depends: what would one answering this question see as "greatness"? There are many things that men are proud of in this life, things they attach to themselves as a badge of honor, as a badge of identity. Whether it be political, geographical, racial, philosophical, socioeconomical or other, we humans have a hard time remembering that we have no lasting city, that we wait for our hidden life to be revealed with a shout from Zion.

We see that "by the Word of the Lord"--the Son, doing the Father's will, respectively--"the heavens were established. And all the host of them by the breath [Spirit, or πνευματον, is also "breath"] of His mouth." Our Kingdom, which shall be one where all things are created by that "new song," is not and never has been of this world. We cannot look to kings, mighty men, or horses -- nor to "the multitude of an host" that will save neither said kings nor fledgling parishes -- but "our soul waiteth for the LORD: he is our help and our shield." 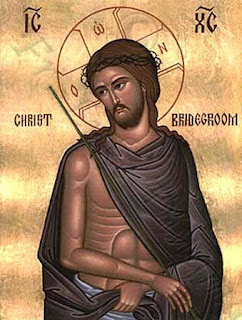 And that God, that shield that makes fire as cool dew of the evening, that Lord whose Kingdom, He tells us, is not of this world, is a scarlet-robed, thorn-crowned, poured-out, crushed, vulnerable, and rejected God.

Theresa of Calcutta said that we are not called to be successful; we are merely called to be faithful. I can think of no more scandalous -- and no more Christian -- a picture than one who, having descended to the lowest degree of failure in the eyes of those who, like dogs, devour their neighbor, nevertheless refuses to devour and, being thus devoured by those in this world who seek their own good, descends (dead and supposedly conquered) into the earth, only now having become a seed fitting to bear the fruit of the Kingdom of another world: that of the Lord, His Word, and His Breath.
Posted by Fr. David at Sunday, April 13, 2008 No comments: