From those who deny them (my response to which is here in that combox) to those who celebrate them to those who limit them--gloriously--to their proper use (hat tip to John for the link), icons seem to be a topic of several blogs as of late. Allow me to come and join the mighty chorus.

My daughter -- the elder, of course -- has been making connections left and right as of late between characters in, say the icon of the Nativity of our Lord and the standard icons in our iglesia pequeña ("little church," what we call our icon corner, though the Fathers speak of the household itself time and again as such). We're also blessed with a priest who has taken her up to blow candles out in front of the iconostasis at the end of every service my daughter attends and, in so doing, has given her a catechism of sorts using the icons up there. 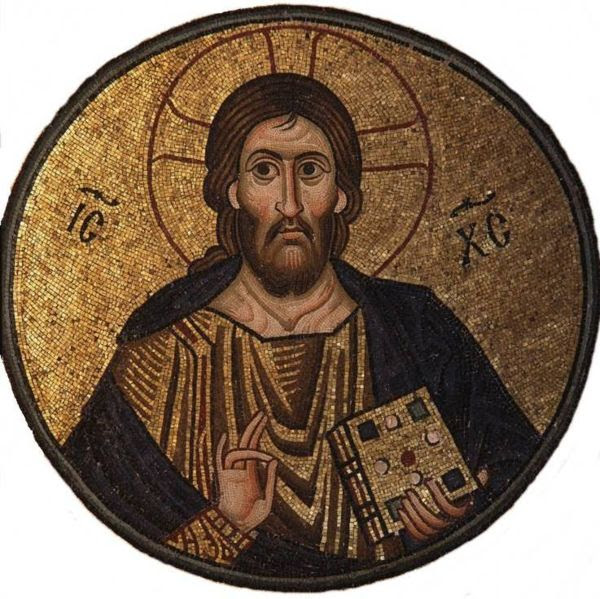 I was pleasantly surprised when, after noticing the icon of "bebé Jesús" on the screen (Fr. Stephen Freeman's site was up at the time), she asked to see "Gran Papá Jesús" (which is not "Grandpa Jesus," but rather "Big Daddy Jesus" or "Grown Up Jesus" -- think Three Bears). We scrolled down until we saw the icon there to your right; she pointed to the IC and said, "Dat say ... DJesus ... Keist," referring of course to the IC meaning IECOUC, or Jesus, and the XC on the other side meaning XPICTOC, or Christ. The icon, then, is already doing for her what it's always done: catechizing the illiterate in the gospel--giving them in colorful mosaic the proper portrait of the King that St. Irenaeus said the tradition of the Church would proclaim to the faithful, both through written gospel narrative and through worship and icon.

In a post a few years back, I talked about how icons can be approached coldly and intellectually, as well as worshipfully and spiritually, with radically different effects. The former, if the sole method of inquiry as to the riches of holy images, leads to an academic dead-end of arguing over minutae and intellectual burn-out. The latter, thankfully, can both be coupled with the former (leading to the cultivation of a multi-faceted and rich spiritual life seen in many of our seminaries, parishes, and monasteries) and stand alone (leading to the reason why our faith has been, for hundreds of years, the faith of countless illiterate peasants to whose piety I aspire). I have been progressing further through that train of thought--mostly thanks to the fact that I now have a two year-old to whom I must attempt, falteringly, to explain what Rich Mullins called "what is too good to be real, yet is more real than the air [she breathes]." Rather than begin at the christological, incarnational justifications for icons--though those are important--it's been more important to me that I kiss these icons because they're depictions of people I love. These are members of a community that will save me if I let them. That I can do something, physcially, that will allow me to express this love for them is gratifying. God grant also a heart that would live in a manner so that the love expressed would be without hypocrisy. The Lord is at hand, after all, and no where is this more apparent than in the holy icons.

Father Thomas Hopko, in his recent release "Praying with Icons," says that icons are a presence of the mighty works of God that are depicted therein. Whether it be the icon of the Nativity, Theophany, St. Nicholas, the Theotokos, or Christ Himself, icons stand as a visible reminder of the invisible reality in which we as believers find ourselves: that of baptized, sealed believers who, though we live in this visible world, are not limited to the seen, as we are by virtue of our baptisms and chrismations citizens of the invisible lasting City, wherein our worship actually takes place. While we don't "need" icons to pray--anyone truly seeking God can be said to be praying--for us as believers who've been initiated into the reality of God's mystical union with His Church, icons are necessary for prayer in its fullness, since all the universe, beginning with the flesh of Christ Himself, has been "shod with the grandeur of God," and it is in these images that we see created things proclaiming what all matter should proclaim and what even the rocks would proclaim if we were silent: that God has visited His people and has done great things for us, and holy is His Name. All sorts of people are attempting to "get in touch" with nature these days, from the secular environmentalists to neo-pagan tree-worshippers. While both groups seem to think that there's some need to listen to what nature is saying, the former only hears its own voice echoing back to it, as it sees mankind (rightly) as part of the creation, yet sees that creation as the sum total of existence and, therefore, no more or less important than human beings. The second tends to go a little deeper and, while it does acknowledge hidden rooms in this "one-story universe" (to use Fr. Stephen's terminology), the hidden glory behind nature is a false one, for its impersonal, collective spirit (shared also by humanity) bears no witness to an actual Creator, a Source of all being. Icons do what all Creation used to do and one day will do: declare the glory of God in all its fullness, a glory which even now shines not etherially from some intangible source, but from the corporeal face of the Word of the Creator (2 Cor. 4:6).
Posted by Fr. David at Thursday, December 27, 2007 2 comments:

Email ThisBlogThis!Share to TwitterShare to FacebookShare to Pinterest
Labels: Best of BLOG

Christ is Born! Glorify Him!

As I will be on the road here in Kentucky this evening and will only return tomorrow night, I'll post my "return post" now and wish those who might swing by for a glimpse a happy feastday.

Your Nativity, O Christ our God,
Has shone to the world the Light of wisdom!
For by it, those who worshipped the stars,
Were taught by a Star to adore You,
The Sun of Righteousness,
And to know You, the Orient from on High.
O Lord, glory to You!

Today the Virgin gives birth to the Transcendent One,
And the earth offers a cave to the Unapproachable One!
Angels with shepherds glorify Him!
The wise men journey with a star!
Since for our sake the Eternal God was born as a Little Child!
Posted by Fr. David at Friday, December 21, 2007 3 comments: