Fellow blogger and "real-life" friend John asked in a comment in the "Credo" post regarding why some synods (re)baptize some protestants (the example of Baptists was used) and not other Protestants. My response was so long that I decided just to put it in a post on the blog proper. 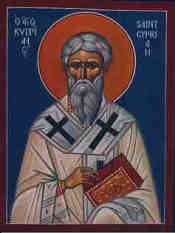 The issue of whether to baptize converts from other Christian confession or to receive them through some other means has its roots early on. It began while Christianity was yet illegal in exchanges between Pope St. Stephen of Rome and St. Cyprian of Carthage (both canonized saints) and never has received consensus within the entire Orthodox world. Most Orthodox who delve into the issue (which, of course, I cannot resolve here) cite the first Ecumenical Council, wherein the issue at hand had to do with triple-immersion baptism versus those done with a single immersion.

The issue in those days was one of making sure that form and belief were both present in the lives of those received; the former had to be given if such form did not exist prior to membership in the Church, while the latter could be corrected via chrismation and repudiation of heretical belief and confession of Orthodox doctrine (or, if chrismation had already been done in the previous confession, mere confession was done). The end result was supposed to be that all would eventually be baptized in the proper form and (ideally) hold the right belief.

Today this is more an issue of exactly into what or (in our case) into Whom we seek to baptize those coming into the Orthodox Church.

There are some -- the Baptists, for example -- who baptize with single immersion because, as they say, the Lord was buried once, not thrice, and we are baptized into his death, as St. Paul says (though, strangely to me, they deny that baptism is itself the moment wherein this baptism into His death is accomplished, in spite of their insistence that the rite reflect this very truth). So the objective, for them, is to reflect the burial and resurrection of our Lord as the already-finished τελος, or goal, towards which the baptism retroactively points. 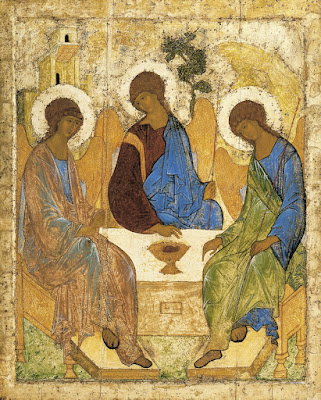 The Orthodox would say that, though we are, indeed, baptized into His death, we are thus baptized so as to participate in the life of the undivided Trinity, hence our insistence on triple immersion. Three dunks, one baptism = Three persons, one Godhead. It is into this that we are ultimately baptized, and such a form reflects the much-developed trinitarian theology of the Church.

It used to be that the OCA had the following guidelines (citation HERE, emph. mine):
So there was a separation in OCA practice between trinitarian theology and baptismal rite, a separation which our bishops have nowadays deemed acceptable to widen, while still maintaining the uniqueness of Orthodox mysteries. Now, in the OCA, water baptism "in the name of the Father, and of the Son, and of the Holy Spirit" is enough of a vessel (albeit, an empty one) so as to be "fillable" with the grace of the Holy Spirit via chrismation, though the number of immersions used to be taken into greater considerations, as it still is in other synods.

One wishes, at this point, that we could all simply stop at "I acknowledge one baptism for the remission of sins" in our mutually-beloved Creed, no?
Posted by Fr. David at Wednesday, January 28, 2009 4 comments:

A Cause for Rejoicing

On a forum I frequent, a poster who works with mentally disturbed patients asked for our prayers regarding a severely suicidal man who'd been abused as a child. This evening, the poster had this to report (emph. mine):

"Wonderful is God in His Saints!

"This morning, Peter woke from a deep sleep and seemed visibly relaxed, and cheerful. At first I was concerned because this is often a sign that someone who is suicidal has formulated a plan and resolved to die. I spent two hours with Peter after

breakfast at his request to talk, and we seem to have got to the root cause of his suicidality, the cause which, up until today he had never told anyone. He had been carrying a burden which, up until today he felt he could never tell anyone. After we spoke for some time and he wept with relief for a while, I asked him what had caused him to pluck up the courage to tell me, and he said that he had an 'amazing dream' where he was in a garden and he met a 'tall, thin man with a long beard dressed in black and wearing a nun's veil' who smiled at him, then the man held up and touched Peter's lips 'with his thumb an (sic) two fingers' and simply said 'Open!' then vanished. Peter woke up and understood that he had to tell someone what had been troubling him for so many years.

"I have a strong suspicion the 'man' in Peter's dream was St. Ephrem of Nea Makri, the patron of the despairing and suicidal. Whoever he was, thank you all for your prayers!"

A catechumen was received into the Church this past Sunday; a former Episcopalian priest for some forty years, he had held out due to his post as a professor and as a pastor to those still continuing on in his flock. Deciding he could no more abide the position, he has now joined the Orthodox Church with more fervor than anyone I think I've seen in my relatively short Orthodox life. Prayers for Jared, as his family life is quite a hostile environment now.

When he was received, he recited the Nicene Creed by himself, in the presence of the faithful. Never have I heard that creed read with so much conviction; indeed, after one or two articles of faith, he choked up. It is this Creed which is quickly becoming my favorite part of any service in which it is found. That a confession with such a relatively general theological nature has become so much more meaningful as of late is something that both surprises and comforts me.

Steve Robinson has stated quite rightly in a comment on this blog that converts to the Orthodox faith (or any other, for that matter) make the worst apologists, at least at first, as they end up focusing almost exclusively on the often-esoteric distinctives of their new faith rather than its catholic core. Such a tendency is understandable, even if it is horribly wrong. Indeed, focusing on the universally-accepted tenants of the Creed would almost be anticlimactic, as one might be tempted to wonder why one would convert from what many consider one of several nicene faiths to another in the first place, much less a more exotic, less palatable one. Indeed, much more titillating is the idea of focusing on all of the exclusively Orthodox practices and theological distinctives, as one can use those to browbeat fellow nicean-constantinopolitan Christians into a hierarchical, sacramental, theosis-based soteriological corner wherein they must become Orthodox because they have been manhandled into that particular confession through a type of forced process of elimination. As one was taught, so one will teach, as it were.

So it is therefore a comfort to me that, when someone asks a question to the tune of, "So, what is it you Orthodox believe," I immediately begin with the person of Jesus Christ, His work on the Cross, His Resurrection from the Tomb, His Ascension into Heaven, His Second Coming, and the Resurrection offered to all who will have faith in Him. I do not talk about fasting for half the year, uncreated grace, essence v. energies, apostolic succession, the Real Presence, the filioque, icons, incense, liturgy, or bishops. While all the latter components of the faith were new to me (a former Southern Baptist), the strongly-preached kerygma of the Creed I had grown up with was something I'd taken for granted, whereas the former Father James (now John) was blessed beyond words to affirm in the assembly of like-minded faithful who would have him what those from whence he came were desperate to denounce as irrelevant. We may confess (correctly) that the Holy Spirit precedes from the Father, full stop, thus distancing ourselves from the West, and we may ascribe "belief" to the One, Holy, Catholic, and Apostolic Church -- belief which is equally ascribed to the Father, the Son, and the Holy Spirit, as well -- thus distinguishing ourselves from Protestants who have markedly lower ecclesiologies, but by and large, the rest of this Creed is affirmed by all of Christendom, and that is because it is the gospel, the power of God unto salvation for everyone who believes.

My three year-old has taken to lighting and holding candles (which we've "rescued" from being thrown out at church) during the Creed in our household morning and evening prayers. It is a wonderful focal point for her to slow down, say the Creed deliberately (praise God, she can say the whole thing herself with very, very little prompting) and focus on the light as she speaks luminous words. If this Faith is to be more than a form of godliness without the power thereof (and it can be and has been countless times over for innumerable souls), it must be because of the radiant συμβολο which stands at the center of our Faith and, in true symbolic fashion, unites us to that which it proclaims. May its radiance illumine the words we say and those we pray, as well as the work which our hands find to do.
Posted by Fr. David at Friday, January 23, 2009 12 comments:

Email ThisBlogThis!Share to TwitterShare to FacebookShare to Pinterest
Labels: Best of BLOG