Why I Am Still Orthodox

I had a conversation with a faculty member and his wife last Sunday during coffee hour. He has been in the Orthodox Church for the entirety of his life; she had grown up in the Church, but had had some encounters with charismatics and evangelicals for a particular reason in her life which I won't go into here; suffice it to say, she came back to the Church later in life, and happily so. She and I had much to talk about.

I've been asked lately by several protestant friends (mostly charismatic, but some evangelical) why it is that I am still Eastern Orthodox. These questions usually come from conversations regarding "How's seminary going," "What classes are you taking," "What plans do you have for working in churches after seminary" (which inevitably touch on the numbers game, church growth strategies, volunteerism and stewardship and ministries for this-or-that age or peer group, along with the lack of such things one sees, both for better and for worse, within the Orthodox Church), not to mention the jurisdictional chaos, present hierarchical confusion, and generations of reticence and dependence on outside sources of income (I frankly, have to tip my hat to the friends who are this well-read on such a small confession in America). In their minds, all this becomes examples of "bad fruit" that should be a signal to me that my Church is nothing more than a group concerned with rubrics, long prayers, and useless bickering over convoluted and irrelevant theological and philosophical principles.

I should (and do, in these conversations) mention the obvious here that, of course, countless groups of immigrants gave in a manner so sacrificial that it boggles my mind in order to establish many parishes that still exist today. Moreover, random cradles whom I have never met in person are some of our most faithful financial supporters while we're here at SVS, and my parish back home has many individual cradle Orthodox who are very forward-thinking in their financial stewardship and the need to bring themselves and their children up in the life of the Church. Indeed, this has resulted at times in giving that is substantial and has funded the building of impressive edifices, though perhaps said giving is not as brutally difficult in these second- and third-generation days as were the widows mites given by the founding members of the temples.

But as to the temples...a man of rather considerable influence in one Orthodox jurisdiction was asked how we can grow our churches. He responded that, when we put more money towards people--both clergy and lay--than we do buildings, then our churches will grow naturally and organically. Since coming to New York, I have talked with not a few laypeople from the area who have precious little good to say about Metropolitan Jonah; they thought they were electing a Pencil-Pusher in Chief, as it were, a sort of mitered fundraiser. Complaints tend to center on his going here and tonsuring a monk, going there and establishing a monastery..."Doesn't he know that we're broke?!" I didn't really know what to say and still don't; where I come from, we were thankful that someone who could give a direct answer to a direct question--"Will you continue to rule despotically?" to which the answer was, "No; that era is over"--and could back it up with a pastoral approach to his role. One sees in him a primate who seems to be looking to establish a spiritual atmosphere that will facilitate giving of "time, treasure, and talent," if you'll pardon the familiar alliteration, instead of bureaucracies meant to channel dough. Yes, I know, the seminarian's complementing the Met. Fine, fine. Let's just leave it with the fact that, Strategic PlansTM and the still-relatively-new nature of his job notwithstanding, he seems to have come to the role with a basic familiarity with carts, horses, and the order thereof.

And this is just one point. Some people have pointed out the stereotype of children who grow up with a cold knowledge of liturgical propriety instead of a warm, heartfelt gratitude for the Christ and the mercy He offers that pervades said liturgical practice and spiritual life and, thus, often leave the Church as soon as they have their drivers' licenses (or, should they come back to the Church later on, often have had a "pit stop" on the way, as did the woman mentioned above, in a more "free-form" group, during which time they came to give a flip about, say, God, which fueled their return to places more patristic). Or, as one friend of mine put it: "it's easier to redirect a passionate but sorta misguided heart than it is to revive a cold dead heart steeped in legalistic [little-o] orthodoxy...it's better to be BOTH 1) passionate about 2) correct doctrine." True, methinks.
Again, the caveats here that 1) this, of course, is not the universal "cradle" experience by any means, and 2) the former need not be cold, nor the latter in opposition to the former; there are many who leave said Protestant groups, both evangelical and charismatic, because of a lack of structure, continuity with the past, good order in service, lack of moral fiber amongst pastors/ministers, etc. Indeed, both must be present, but, again...cart, meet horse...
So I mention all these things--some of which, of course, get set up quite often as strawmen--because I think it's safe to say that the "New's worn off" the Church for me. It will, after all, be ten years post-chrismation for me this coming Pascha. So why, given the areas in which one could say I "traded down" in becoming Orthodox, am I still in a tiny, mostly culturally irrelevant (let's be real, here) confession of faith that can very easily lend itself to the very things Christ lambasted the Pharisees about (namely, Matt. 23 and Mk. 7.1-23), especially given the examples of people who are working, according to my Church, with a "limited light," yet who seem to follow Christ more devoutly and closely than many in a Church with "true light," as we sing every week?
A fair question. At times I think maybe my chrismation name of Peter was apropos, since there have been several times when I've found myself gazing at the cross behind the altar and thinking simultaneously that 1) this Fella has some funny ideas about fishin' for men if this is His way of instituting it, but, 2) to Whom else will I go? If there were things which became clear to me as I studied the Faith and became acquainted with the local communities I would eventually join, it was that 1) the Incarnation, with its subsequent communication of humanity with divinity--θεωσις, in other words--borne out ultimately on the Cross, was to be taught in all its glory no where else but here; 2) the divinizing work of the Cross was to be encountered in no greater way than in the waters of baptism and the food and cup of the Eucharist; and 3) the real work, then, which brought life to all the circles of influence for which I could possibly be held responsible, is the consistent, disciplined, and selfless execution of mundane things. Do the dishes for your wife. Read to your daughters. Listen to fellow seminarians gripe without judging them. Cross yourself, even when you're half-asleep and/or just threw a temper tantrum. Pray the Our Father and realize that you really are forgiven as you forgive. Forgive, then, always. Gentle words. Drive less aggressively. Eat better, pray more regularly, though not necessarily more. Think of little things to do for other people that will help them out, preferably without anyone's knowing about it. Read your Bible, pray every day, and you grow, grow, grow. And the like.
The faculty member's wife and I concluded that, for all the ways in which the Church can be said to be bested by heterodox Christians, the Church can work on those areas and, in so doing, will come ever closer to that which She is meant to be. In contrast, were I to go to a heterodox confession, I could probably find more committed individuals per capita, true, but any attempt to bring the mystery of Christ's presence in the Eucharist or altar theology to fit more with a patristic instead of a reformed and/or legalistic soteriology would thus deform said confession away from the image it seeks to portray.
Our problems are real, then, but at least we can say that bringing ourselves in line with the truth will not make us less of what we were before (well, hopefully less sinful), but rather more of what we should be. We are not dealing with an intrinsically false nature that must be fundamentally altered, but of failing to live up to the Spotless nature our Bridegroom expects of us. We have the ability, then, as my priest back home has said, to "be the change you seek in the Church." In other words, if the Church has sinned, well, then, you are the Church. You repent, in the God-given context of the mysteries you've been given, and God will heal as He will. Fill up the form our fathers have preserved by God's grace with the content worthy of it--the good news of man's recapitulation in and through the kenotic sacrifice of Christ--and that which is lacking will be rectified as we imitate Him.
Posted by Fr. David at Monday, October 25, 2010 9 comments: 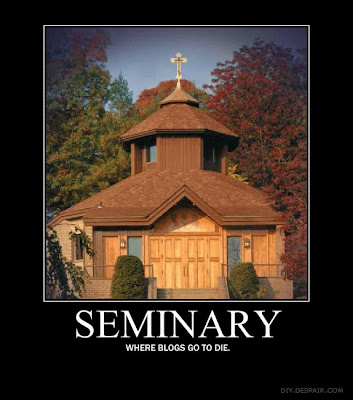 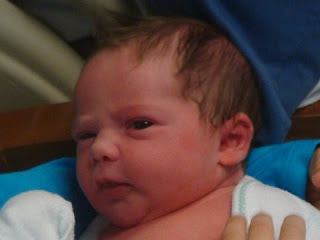 My daughter, Laura Louise, was born today at 9am sharp.

Mother and baby are both doing fine, and resting.

We give glory to God for her safe delivery, and ask that St. Laura of Córdoba intercede for her. Your prayers are appreciated.
Posted by Fr. David at Thursday, October 07, 2010 7 comments: