Fr. Stephen Freeman's most recent post (HERE) got me thinking about the epistle reading from yesterday’s liturgy. One part that stuck out to me was at the beginning of Hebrews 12 where we said to be “surrounded by so great a cloud of witnesses.” Christ is surrounded by the cloud on Mount Tabor, and we read in the Old Testament of when the cloud of God’s glory descended upon the temple. The cloud of witnesses who have gone on — what other cloud could they be said to inhabit but this cloud of glory which is the presence of God? How could we say that we enter the presence of the Living God and not also enter the presence of those who are with Him, and who, therefore, are always with us in this one “storey”?
Posted by Fr. David at Monday, June 23, 2008 2 comments:

For pictures of John's baptism mentioned in the last post, click HERE. Unfortunately, our camera battery died halfway through (not the first time that happened-- you'd think we'd have learned by now!), so Amanda's (now the newly-illumined handmaiden of God Deborah's) chrismation photos were taken by our Matushka and will be emailed to us soon, Lord willing. God has granted us two new siblings in the Lord; may He grant them both many, many years! 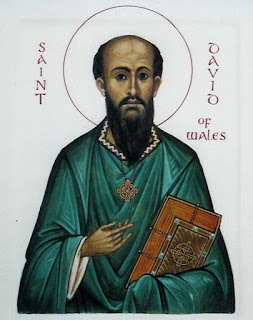 The icon to the right is of the David whose name I almost took when I was tonsured a Reader (my being welsh -- among other things -- and whatnot). I was reminded of this by a site run by an iconographer in the UK (found HERE, with a hat tip to Owen). St. David is commemorated on March 1, and his bio as follows is taken from OrthodoxWiki.org.

St. David, pray for us to Christ our God, that we might "be steadfast...and do the little things."

Much of our information on the early history of Saint David comes from two sources: the 11th/12th century hagiography Buchedd Dewi (Life of David) of Rhigyfarch and the 12th-century writings of Giraldus Cambrensis (Gerald of Wales). David was a descendant of the royal house of Cunedda. Rhigyfarch wrote that David was the son of Sanctus Rex Ceredigionis, where Sanctus has been interpreted as a proper name and its owner honoured by Welsh Christians as Saint Sant. The Latin phrase itself translates as "a holy king of Ceredigion." The king of Ceredigion in the 510s was Gwyddno Garanhir, according to regional tradition. His title Garanhir ("crane legs"), certainly indicated spiritual accomplishment to the Druids who bestowed it. If the son of King Gwyddno, David was a grandson of King Ceredig, and a nephew of King Maelgwn of Gwynedd, and a brother of Elphin the successor to the Kingdom of Ceredigion and the foster-father and first patron of the bard Taliesin. Little is known of his mother, Non (honoured by Welsh Christians as Saint Non), though she is said to have been the daughter of a local chieftain - some versions of the meeting of Sant (or Gwyddno) and Non state that Sant forced himself upon Non.

David was born on a stormy night at or near Capel Non (Non's chapel) within a short walk of the present day city of Saint David's. The ruins of the medieval chapel are visible near the site, and a nearby well is still a site of pilgrimage. He was baptised by the Irish monk St. Elvis, and educated at the monastery of Hen Fynyw. After ordination, David was taught by the elderly monk Paulinus, whose blindness the young David healed by making the sign of the cross over the monk's eyelids.

He became renowned as a teacher and preacher, founding monasteries in Britain and Brittany (on the west coast of modern France), in a period when neighbouring tribal regions (that were to be united as England three hundred years later) were still mostly pagan. He rose to a bishopric, and presided over two synods, as well as going on pilgrimages to Jerusalem where he was anointed as a bishop by the patriarch.

St. David's Cathedral now stands on the site of the monastery he founded in southwest Pembrokeshire; in early medieval Britain this part of Wales was located near several important Celtic sea routes, and was not nearly as remote as it might seem today. A shrine to Saint David, containing his bones, the bones of his spiritual father Saint Justinian of Ramsey Island, and possibly those of Saint Caradoc, is located within the cathedral.

The Monastic Rule of David prescribed that monks had to pull the plow themselves without draught animals; to drink only water; to eat only bread with salt and herbs; and to spend the evenings in prayer, reading and writing. No personal possessions were allowed: to say "my book" was an offence. He taught his followers to fast, especially refraining from eating meat or imbibing alcohol. His symbol, also the symbol of Wales, is the leek.

The best-known miracle associated with St. David is said to have taken place on an occasion when he was preaching in the middle of a large crowd. When those at the back complained that they could not see or hear him, the ground on which he stood is reputed to have risen up to form a small hill so that everyone had a good view. The village which is said to stand on the spot today is known as Llanddewi Brefi. A more mundane version of this story is that he simply recommended that the synod participants move to the hilltop.

One of Rhigyfarch's aims in the Buchedd Dewi was that his document could establish some independence for the Welsh church, which was risking losing its independence following the Norman invasion of England in 1066. It is significant that David is said to have denounced Pelagianism during the incident before the ground rose beneath him. Giraldus Cambrensis, the nephew of a Bishop of St. David's similarly hoped to demonstrate the ancient independence of the see as the archbishopric of an independent Welsh church; he was himself nominated for the position of Bishop of St. David's on at least three occasions, but was turned down by Henry II initially and the Archbishop of Canterbury subsequently after the accession of John.

William of Malmesbury recorded that David visited Glastonbury intending to dedicate the abbey there, as well as to donate a travelling altar including a great sapphire. He had a vision there of Jesus Christ who said that "the church had been dedicated long ago by Himself in honour of His Mother, and it was not seemly that it should be re-dedicated by human hands." So David instead commissioned an extension to be built to the abbey, east of the Old Church. (The dimensions of this extension given by William were archaeologically verified in 1921.) One manuscript indicates that a sapphire altar was among the items King Henry VIII confiscated from the abbey at its dissolution a thousand years later. There are unverifiable indications that the sapphire may now be among the Crown Jewels of the United Kingdom.

His last words, according to the Buchedd Dewi, were: "Be steadfast, brothers, and do the little things." "

...we will, Lord willing, be baptizing the catechumen John tomorrow before Great Vespers for Pentecost; this will be followed the following morning by both his and his wife Mandy's chrismation before the feastday liturgy. My wife Audra and I have been blessed with the honor of being their sponsors in this beautiful event, so pray for us, as well, if you would.

May God grant His servants many blessed years in His Vineyard.
Posted by Fr. David at Friday, June 13, 2008 3 comments:

Christ is Ascended! He Has Gone Up with a Shout!

"By eating a piece of broiled fish, He indicates that He has consumed with the fire of his divinity our human nature which had been swimming in the salty sea of this life, and He has scorched away all the damp slime our nature had taken on as it sank into the depths and was battered by the waves. Thus He made our nature food fit for God, fashioning that which before was defiled into sweet food of which God can commune.... Another meaning, namely, active virtue which, aided by the coals of the asceticism of the desert and of the hesychast life, removes everything that is moist and fat. And the honeycomb suggests knowledge and divine vision, for the words of God are sweet. There is also another kind of comb, one full of wasps, which leave no honey. This signifies the wisdom of the pagan Greeks. But the honeycomb suggests the sweetness of divine wisdom[, left by Christ]. For Christ is like the bee, which is small in size (for the Word is concise and weak in worldly power...). Yet is beloved by both kings and commoners, who apply the product of its toils for their health and healing."