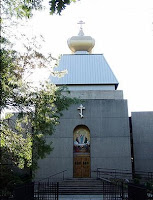 First off, a blessed beginning of the Dormition Fast to all on the Revised Julian Calendar.
A week ago today we went up to New Haven, CT and communed at Holy Transfiguration (OCA), which will be my parish assignment for the Senior Year. Good night, has it been two years already?! How bizarre to think that we'll be the "big men on the totem pole" in the student body. Audra says she doesn't want to think about it. It has been hard to say goodbye to so many good friends. Doing so after being together with folks for two years was harder than being with folks for just one, as was the case after first year.
I'm ambivalent about the shift in Sunday morning locations. We're supposed to be in training to be parish priests, yet OCA seminarians are in Three Hierarchs' Chapel for the first two of the three M.Div. years; it would be nice to do what the Antiochians do and have us in parishes all three years. Yet Three Hierarchs' is a community place of worship, and the first- and second-year students help make that run. There's a part of me that will miss the familiarity of SVS on Sunday, but I'm ready to be in a parish, learning.
Three Hierarchs' is also just a walk down the hill; Holy Transfiguration is an hour and a half away (needless to say, we anticipate Audra and the girls to walk down the hill some of the Sundays this year, while Papi drives to New Haven). Audra and I both loved our experience there, however--Audra so much so, that she's said she wants to try and make the trip out there as much as possible. We had to get there extra early, and during the period before liturgy started, Laura was banging on a seat in the nave. Not one person turned around in disapproval. This, for us, is one of our "litmus tests," as we have been in several churches that make a point of quashing any kind of activity that small children might engage in (outbursts, laughter, crying, running around--kids being kids with all their "holy noise," in other words). Coffee hour was similarly enjoyable, as Father Michael conducted a sort of informal back-and-forth with the parish--I recognized the basic format of what, as a Protestant, I would have called "prayer requests/praise reports" from among the people--what a great way to keep abreast of important events in the lives of your brothers and sisters in Christ that, sadly, might not get mentioned in post-liturgy announcements because of their "insignificant nature."

To top it all off, a former member of the parish who had moved to Alaska to teach at St. Innocent Academy was there that Sunday and gave us a couple of CDs of the kids' singing, but also earth from the grave of our family patron saint, St. Herman of Alaska--the earth from the bag is now in a case on a shelf in our icon corner. Very unexpected generosity, along with very eager people who introduced themselves and wanted to get to know you, plus the fact that Fr. Michael was conducting it himself...excellent. Our assistant dean of students told me that he is one of the best mentor priests our program has. Our first impression seems to back that up. Keep us in your prayers.
I am teaching for the Institute of Reading Development this summer, as I did last summer. Highly scripted, meticulously examined and very well constructed lessons that promote scaffolding for learning the steps of reading faster, smarter, and more. I do get that feeling from some folks I talk to on the phone that we're actually being talked to the way the supervisors are trained to talk...it kind of reminds me of the hackneyed catchphrases of CPE from last semester ("What I'm hearing you saying is..." or "Mmm [eyebrows furrowed and lips nostrils flared in what I hope does not come across as fake concern but sure feels like it], that must be really tough.") I always like to take the gist of such cliches and word them in a way that doesn't seem so contrived. Regardless, I just try to remember what they're trying to get across to me--on a whole, the program has proved itself very competent and unafraid to take a good, hard, critical look at itself to foster continued improvement. It's also been REALLY good to get back on the other side of the classroom for a few weeks, as well. 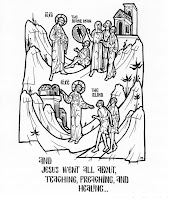 Hope and Kate are turning into quite the theologians, as well. Today's gospel was the healing of the blind men and the dumb demoniac. Some comments from the girls on the way to church this morning:
Audra: "How could Jesus heal people?"
Hope: "Because the Father let Him do those things, because they [the things] are good."
Audra: "Why did He do miracles?"
Kate: "Because He loved people."
Hope: "Because He knew His Father made them [people] and He knew they are good."
A good start to base further inquiry on, methinks.
Finally, there's this link (http://pithlessthoughts.blogspot.com/2011/07/stages-of-conversion.html) that Steve Robinson linked to. The combox has a few mild naysayers, but this perhaps is due to a failure to see the exaggeration in the stages of conversion to another religious group. I was not this stereotype, but some things I did once upon a time fit these stages pretty well. All in all, I think I'm pegged pretty well. The antagonism my mother and I had during the first few years after my conversion was no doubt due (in part) to the stuff in Stages One and Two. I'm sure that several people at ORU would attest to my becoming the sort of "Orthodox Guy" that folks tolerated well enough and even bounced curious questions off of, but who seemed to be interested in little else himself. Reality of parish life has been anticlimactic, and necessarily so. The reality of being Orthodox in the American South very often means being resource-poor and creative; I do wonder if my months of classes offered at St. Barbara's was motivated by Stage Three. After ten years, two of which have been spent in seminary with a broad cross-section of the Orthodox Church as a whole, not only am I much more willing to work with the Church as a whole, as-is, but I'm much less interested in providing apologias for this or that aspect of the faith that diverges from Protestantism, which of course accounted for much of the "Best of Blog" category and the articles in the sidebar. Seminary may be "where blogs go to die, but mostly, I'm in Stage 5.3, as well, and just feel like there's much less to say in the way of spreading the faith through the blog. I'm convinced that this is the Church, not in spite of the people, but because of them. Seminary has helped further the process along in helping me see that learning to be a more approachable and likable human being goes just as far, if not further, than being a know-it-all Ortho-answer-man. The phrase, "you are, for the most part, much worse at being a decent human being than all those people too stupid and impious to realize how awesome your new religion is" cuts pretty close to home. Which isn't to say that I've "arrived" at that state of being someone who can relate as "all things to all people" and whose interests move well past things Byzantine, but perhaps the awareness is a start. Excellent post.
Posted by Fr. David at Tuesday, July 26, 2011

I think the hyperbole of the piece referenced (despise is used very, very frequently) tends to mask the fact that the general description rings true. But for each stage, there is also a different way of matriculation. Perhaps much has to do with how we look at ourselves and our place in the world to begin with, and our place before God. An ounce of humility and candor (overcoming blindness) may not cure these stages, but I think it opens other possibilities along the way. Each stage seems to reflect a hard hearted or close hearted progression rather than one that began with a realization of brokenness (in one's self). I'd hope that perhaps seminary helps less in curing the blogging, but in softening and fortifying the courage required for a good (ultimately Orthodox) heart...one that looks for the good and what is right in that which surrounds us that can be made better in the Church... but knows others may find the one thing necessary that speaks to this process in a way they will listen...and it may not come from us... at least not now.

As James said above, the hyperbole may make some pass over it, or say "That can't possibly refer to me!" but I was laughing out loud reading the whole thing. I certainly know folks who fit the bill....as for myself, I think I passed through all those stages as a teeanger becoming an observant Jew (and often driving my parents crazy in the process). My second "conversion" around, I think I'm mellower - ie I've passed through some of those stages, but in an expedited fashion, and with much more awareness.

Thanks both for commenting. The process was a bit easier for me than for some friends I know who became Orthodox then left some years later, because it seems like they got far too bogged down in the details of what they thought was a monolithic, purist faith. Kind of like Bart Ehrman's disillusionment as a fundie with a Bible whose text was not uniform, airtight, etc. I've always been a "big picture" guy, taking it for granted that there's good and bad in any group, skeletons in everybody's closet--but that, in general, Orthodoxy works much more like the Early Church envisioned Christianity to work.

Byzantine: Fascinating blog. Glad to meet you; I had an active interest (misguided but honest at the time) in some of the Messianic Jewish groups out there, which helped me move towards and embrace Orthodoxy later on. I look forward to reading your blog further.