An Update for August, Abp. DMITRI, and "Psalms of David," Revived

Greetings from the ravaged leftovers of a post-Hurricane-Irene Crestwood, NY.

Seriously: the photo to the right is the worst of our part of campus, as reports were (mercifully) overblown and the worst we got was a little wind and rain. Grateful for the mild evening. In anticipation for the worst, Divine Liturgy this morning was cancelled, but tonight's Vespers for the Beheading of John the Baptist went as planned, as did a Panikhida for Archbishop DMITRI, the beloved archbishop of Dallas and the South (and founder of said diocese) who fell asleep in the Lord this morning at about 2:00 am. 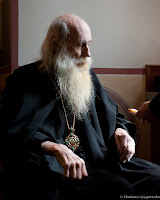 Vladika DMITRI ("Vladika" meaning "Master," or better put in today's parlance, "Teacher,") was the first bishop in Orthodoxy I actually got a chance to know, and whom I felt knew us as his children in Christ. This is not to say that Bishop BASIL of the Antiochians wouldn't have been such; simply, rather, that we did not spend enough time in our Antiochian parish in Tulsa to have that happen over the years. Rather, we moved to Ft. Worth and joined the local OCA parish, where this oily-behind-the-ears convert got all hot and bothered about how he had gotten baptized and whether that was Orthodox enough (he even went down to a monastery and poked his nose around, "just to ask about what they thought" about reception of converts, which can be a hot topic in some circles. Thankfully the abbot was sane and said I should go and--gee, I don't know--talk to my bishop. I was a bonehead, of course, and looking back I can only shake my head at my naivete. Thank God the abbot wasn't a power-hungry egomaniac looking to prey on starry-eyed neophytes in search of "true Orthodoxy" or some such).

So I went to meet with Vladika, who made time for me just a few days from when I called the Cathedral. It's true what the priest at tonight's Panikhida said: Abp. DMITRI definitely leaves his mark on you when you sit and speak with him for a while. His was the first voice I ever heard who spoke both dogmatically ("There are no sacraments outside the Church") and pastorally; his gentle, grandfatherly way reassured me that, yes, it would be OK, and that Orthodoxy is a faith where things can go this way, or that way, or sometimes both ways...and still come out keeping its balance. And yours. Vladika was a man very aware of the balance of the Church, and how it kept you.

His sense of mission was obvious, especially to me, since I'd already been looking to work as a missionary in Spanish-speaking areas. Every time I saw him it seems he had some Spanish-language translation of a liturgical service or catechism to press into my hand. His labor over the years has been remarkable, considering all the responsibility he has had to manage over multiple dioceses; "Roysterisms" aside, his efforts are the starting point for what I hope are coming revisions to his much-appreciated materials. I will always remember his anecdotes about the "washaterías," and how certain of his acquaintances would sign off with "Nos watchamos, Maestro," which he told me no fewer than half a dozen times as if it were the first.

He tonsured me a reader, and blessed me to go to seminary. It seems both he and the newly-elected Metropolitan JONAH were both of the same mind about me; my bringing up seminary to them and asking for their blessing resulted in their saying, explicitly, "I give you my blessing to go to St. Vladimir's." I had been wondering about St. Tikhon's as well; when I expressed surprise at so specific and immediate a response to my question, they both just waved off any discussion (with a gentle smile, mind you), and said something to the equivalent of, "No, that's where you should go." So off I went. The priest serving tonight's Panikhida mentioned Metr. JONAH's connection with Abp. DMITRI and how the latter had deeply influenced not only those at SVS now from the Diocese of the South, but also the Metropolitan himself. I am grateful that His Beatitude stayed at Vladika's bedside during his final days in this life. May my beloved archbishop rest in peace, may his memory be eternal, and may his soul dwell with the blessed as he awaits the Resurrection. May he pray for us, as well.

On a lighter note...this is L. (with K. in the background) at Sherwood Island Beach in Connecticut. It appears that L. might be just a bit fond of playing in the sand. And eating it. And hamming it up for the camera. That last part might just be from her Papi. Maybe.

Those of you who have been long-time readers of this blog (and those people have, with the advent of Facebook, probably dwindled down to a handful, due to the temptation to broadcast one's life through blurbs and links instead of lengthy posts) will remember a time both three and five years ago when I attempted to start up a series of posts reflecting on the psalms of David, my patron saint. Given that I have little interest in blogging about seminary life (some--for example, my lovely wife--have found it helpful; I am just not inspired to do so), I have thought about trying to revive the series during my final year here as a sort of spiritual discipline, and as something to write about. You can read the ones from several years ago by clicking on "Psalms of David" in the sidebar to the right; all subsequent posts will be tagged with this label, too. The work to the right, written by Fr. Patrick Henry Reardon (whose knowledge of the Scriptures continues to amaze me -- subscribe to his podcast!), will be what I draw heavily from, along with my own reading. Hope you like it.

Blessed Feast of the Forerunner to y'all.
Posted by Fr. David at Sunday, August 28, 2011

It was heart warming to hear about your interaction with Vladika Dimitri. May he hear choirs of angels and see the face of his beloved Christ!

Many blessings to you and your family as you forge new relationships in your assigned parish. Nurture the love of Christ within your heart and let that love shine through upon all those you meet!

Fr. Pat's book is certainly amazing: I recall finding the last copy on the shelves when I was at AV, so I nabbed it. His instruction to read it slowly (about one psalm per week) is admittedly difficult for me to get along with, hah.